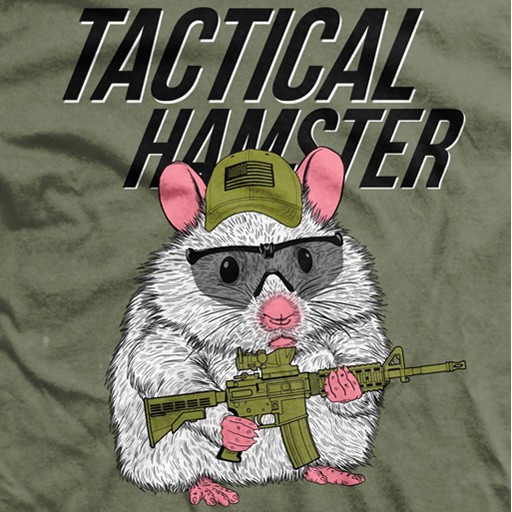 His name is Gregory. He's the Tactical Hamster. We don't know where or when Gregory was born. But what we do know is that Gregory is coming in hot at a thousand MPH and crashing into the homes of every bad guy on the planet. His objective? Total fucking annihilation of everyone he perceived to be a threat to these here United States of America. This righteous little bastard shows no mercy. And when you're the type of badass fur-ball who refuses to show quarter to your enemies, you have to dress for the part. Step 1: ballistic glasses that you wear even when you're not shooting. Step 2: American flag velcro ball cap. Step 3: A rifle that you're totally willing to sacrifice your kids' college money for. Step 4: Take cool pictures. The most important thing Gregory does, aside from looking badass, is train. It's not good enough to just look the part. In order to be the part you need to be ducking your corporate job early and sacrificing quality time with your family to put some rounds on paper targets. Also, watching tactical YouTube videos also counts as training. Gregory knows this and he trains like a mothafucka! Gregory does all of this because he refuses to be a victim. He's not going to be another statistic lodged up Richard Gere's ass. He's going to slay a sumuma bitch before that happens. Be like Gregory. Train for the fight.