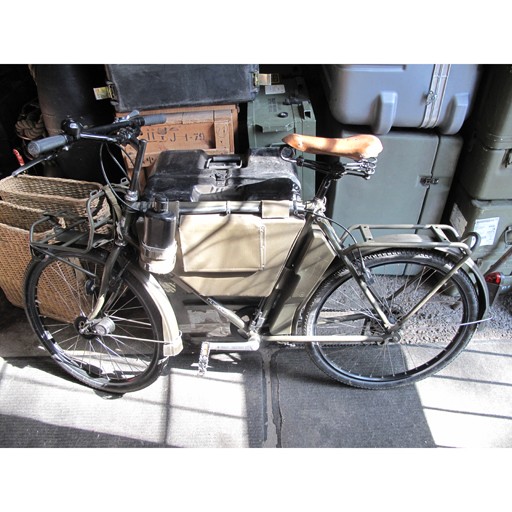 The MO-93, officially called Militärrad 93, was the first major re-development of the Swiss Army Bicycle, built by Villiger and Condor between 1993 and 1995. The basic frame layout was retained for compatibility with existing equipment, and outwardly appears roughly similar to the MO-05 except for its green color (technically: RAL 6014 F9 Gelboliv - olive-yellow). It was equipped with a 7-speed derailer gearing system, which is protected by a hefty guard at the rear axle. The MO-93 also differed by having a front carry rack fitted as standard equipment in addition to the rear carry rack. The front rack also served as a mounting for the new headlight assembly which was operated by an axle-mounted dynamo on the front wheel. It was also fitted with modern mountain-bicycle style handle-bars. Many other modern features were incorporated such as rim-brakes. The characteristic frame carry box was retained. Condor produced 5,500 units for the Swiss Army at a price of CHF 2,200. This bicycle is rather heavy, yet sturdy, at an average 25 kg. A few are still used at the Company 17 (Fallschirmaufklärer Kompanie 17) Special Forces base and Paratrooper school at Locarno-Magadino military airport in Southern Switzerland. According to the Swiss Army website, bicycles are currently used by cadet officers, sergeant majors, quartermasters, cooks, guards, in addition to physical training and movement between barracks and firing range. Specifications: - Gears: 7-speed Shimano XT at rear wheel - Brakes: Magura hydraulic rim brakes, ceramic coated rims - Dynamo: Dynamo spoke FER 2000 - Weight: 21.5 kg (minimum)